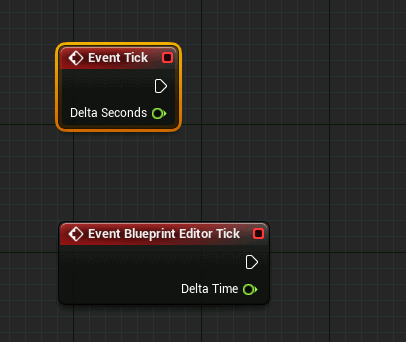 Why not use an Editor Utility Actor?

Editor Utility Actors don’t quite get you the exact functionality that seems useful enough for ticking in the editor via an actor. It will tick in the preview windows of blueprint and potentially lead to lots of head scratching as you realize that the blueprint you were working on is logging when you are trying to use it in other places. Also, there are times where you actually do want the same actor runtime as well (It’s rare but totally a valid case).

The Solve.. Make your own actor class!

In your custom actor class you can use this to add a bool that toggles being able to tick in the editor. This way whenever you need this you can just simply check it on and get going. It also is separated so that you can have different logic happen in the editor vs in-game. Most of the time I end up with 1-1 anyway but its nice to have the option.

Then when you are done you should be able to add the new BlueprintEditorTick to your event graph and get rolling!

This is pretty dangerous if you aren’t mindful with what nodes you use in here. Try not to do things like Add Component or any other nodes that would spawn objects into the world or if you do make sure you store them and clean them up. Delays might work but they could be a bit odd as well. Just be aware that it can be fragile at times so make sure to give unreal some cake beforehand… ❤️

This image shows an example of how to setup an undo-able function call in unreal 4’s blueprints. This was reported as a bug and marked “by design” simply because you can do it 100% controllable and custom in blueprints

Starts the undo stack and allows for anything after this call to be grouped into 1 undo operation.

Every object you want to be undo-able has to be added by using the Transact Object node. Then you can do whatever you want to the object and it will properly go back to whatever it was before doing anything to that object.

Closes the gates and stops recording anything else to the undo stack. Which then will allow you to finally undo properly you custom tool’s operation.

This was a bit tricky to find since typing the word “Undo” in blueprint doesn’t give you much. Under the hood though everything undo-based is actually referred to as the Transaction System. Which is why these nodes are called Transaction Nodes.

That is all, hope this helps and Have a great day! 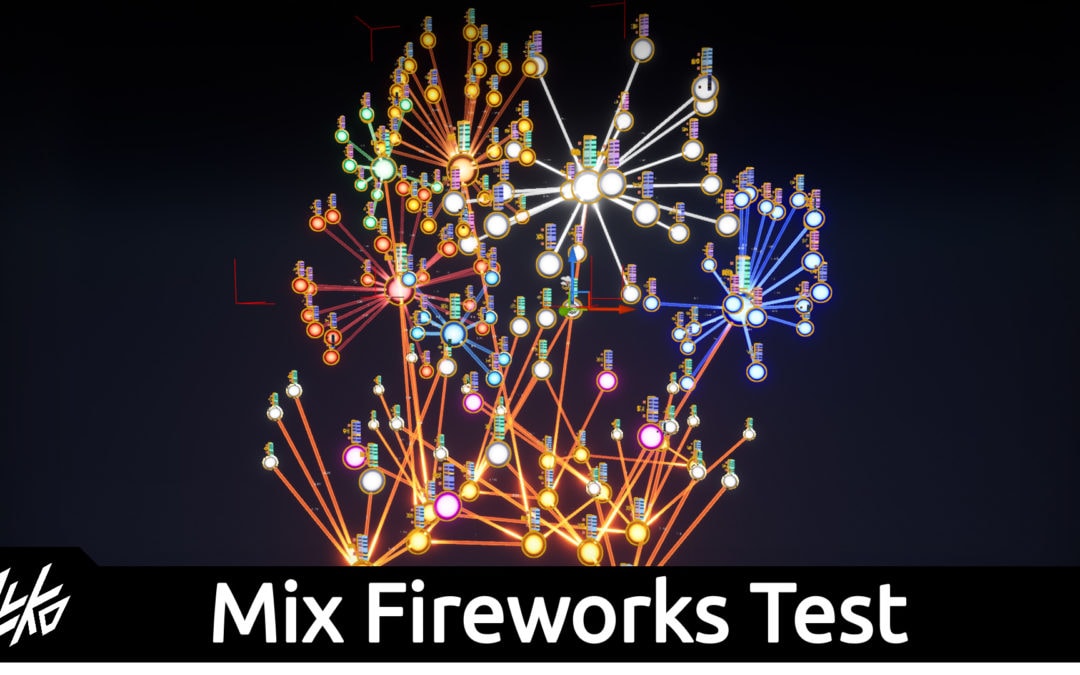 So, I had an idea. I wanted to make fireworks as a way to celebrate the 4th of july. And I figured lets try to do it with project mix.

What you see in the video is 150 Connected nodes. Each node has their own note and sound settings.

All of these are defined by presets in which I manually create by importing a wav file from FL-studio with each octave I want to have available to use. Like I’ve talked about in the past with the post about audio visualization using the baked analysis that unreal just added, there are only a handful of actual sound files which makes my life so much easier when it comes to quick importing and management. However, I don’t currently have support for just.. One-Shot type sounds.

I tried to take an approach to create this that is a bit additive. I started with the basic kick to get the loop that I wanted to use, layered in the snares and high hats, and then went to town emulating the “firework” feel I was going for. This meant that I needed to create a few buttons to help make things faster like Randomize Notes, Randomly place in a spherical pattern, and selection helpers.

Right now there is NO MIXING setup at all. This is about as raw as audio playback can get in unreal. Just play the damn sound… This is also why certain parts might sound a bit too loud or soft. So the next phase of development for this system is pretty clear. Project Mix.. needs.. well.. a MIX of some sort. But that’s not the most worrying thing to me. I think the biggest issue with development right now is that I have to hit play.. wait for the loop to start… and hope that it sounds the way I want. This makes things extremely slow and aggravating to work with. So, I think I am gonna take an interesting step forward into editor-based nodes that actually play .. while I am tweaking them (Obviously with some control on when to play). Imagine kinda like planet coaster, where the roller-coaster is running along the track you are currently building. This is something that I think is needed in order to not rip my hair out creating the next scene and ultimately.. the final vision for this project ( Which I am currently keeping to myself ).

Then… well there is the time synth.. which aims to solve all of my synchronization problems… so I gotta get going on that too. I did watch dan’s amazing overview of it and I think it has a ton of potential with one fatal flaw… time synth components are made to not be used spatially… 150 times in a scene. Therefore.. I’d have to tell the nodes to call the master time synth in order to play things on time efficiently. Maybe if I do that I can convince the awesome audio folks to help me out with getting 3D sound to work properly per node.

So to finish it off.. here is a few bullet points for the future.

Those three are enough to keep me busy for awhile. On that note, have a great day <3

Things have been wrapping up quite nicely as I finish up a ton of cleanup and usability features for the Manipulator Tools Plugin. Here is a bit of a taste of what it looks like to manipulate Vectors, Transforms, and Booleans.

The idea is pretty simple. Do you have variables that you’d like to edit in the editor on the actor itself as a nice way to visualize what you are changing on the fly? This is where the Manipulator Components come in handy. Here is the hierarchy of the test tank blueprint.

You’ll notice, that there are 4 green icons with _MC. These are the Manipulator Components and each one has settings to control what shapes it can be, what property to attach to for editing, and a bunch of other settings like constraints, offsets, and a few other extras. What makes this really neat is you could essentially do what the Control Rig Plugin does but for ANY ACTOR. ANY BP, ANYTHING that can have a component added to it and be added to the world.

Right now, I am wrapping up some helper functions and also getting it to be a bit cleaned up code-side. Then I will document how to use it, setup examples, and look into distributing the plugin either via the marketplace or github. I don’t know whether or not I am going to charge for it yet, but it is a CRAP TON of personal time that I have dedicated so far and supporting a plugin is definitely no small task. Please keep that in mind that if I do charge for it, it’s mostly because that money will go into the time to maintain and support it.

Lastly, the entire system is based off of the current “Show 3D Widget” functionality in the editor. If you are unfamiliar with this please feel free to watch the tutorial video on how to use those. Then, get angry at the fact that you have no control over how they look or work like I did and get pumped for the MANIPULATOR PLUGIN!