You may have noticed by now that I have been dabbling with a new website the last few days. Let’s go ahead and take a brief moment to reflect on the wonderful journey that is web shenanigans.

This is my journey.

I remember when it was literally a page that had terrible buttons and a sign up sheet for anyone who wanted me to make a drawing for them. ( I was somewhere around 14 when I made that page ) back when it was called ZukoDesign.com.

Then, it turned into a wordpress page and that worked pretty well for awhile. I had paypal integration so that people could buy zPipemaker which I could use to track how many people bought it, add them to a newsletter for zPipemaker (if they wanted to) so they could receive updates, and even see how many people downloaded the free version. That was pretty nice, but this was during the dark ages of wordpress. I constantly had to update it and it was hell to try and even think about manipulating things to look the way I wanted it to.

One day, to my surprise, my site stopped working. So I said **** it and moved on to trying something else. This led me to Adobe MUSE. Now MUSE is pretty fantastic, but it’s not real-time and it also is heavily built on modules that you have to pay for to get way better looking stuff. EVEN THEN… it still had some seriously annoying bugs with simple things like light-box and no community that knows how to solve em. ALSO, you have to manually tell it how to look on mobile devices which is just a whole extra PAIN! So essentially, that led me down the path to “OK EVERYTHING EXTERNALLY HOSTED!”

This Idea led me to basically have a 2 page website. A landing page and a page for zPipemaker and that was it. However, I really want to start documenting things as I go with all of these exploratory and self growth side-projects. I have tons of little tips I find here and there for many different things. Now I wanted the wordpress experience back but with the adobe muse visual editing experience. That doesn’t really exist.

WAIT YES IT DOES!

Apparently people have been working really hard to get visual editing to work in wordpress. So one quick google search for “Best wordpress themes 2019” got me to eventually land on ELEGENT THEMES DIVI THEME.  This amazing advancement in web technology is empowering me to DITCH MUSE and get a real-time online visual editor that doesn’t suck. It honestly has so many features and a broad enough community that just about any problem I am likely to encounter is solved by someone out there. Whew. I still have a few things I would like to do, but the biggest thing so far is I have had to make a few changes to the CSS in order to fix a couple random bugs with the header.

I am going to try and actually post things on a regular basis. It all comes down to how much I really enjoy this or not. I’ve found that if I have to fight the interface then i won’t want to do it. My hope is to be able to create pages that are actually good looking and informative! SO … HERE GOES NOTHING! Have a great day 🙂 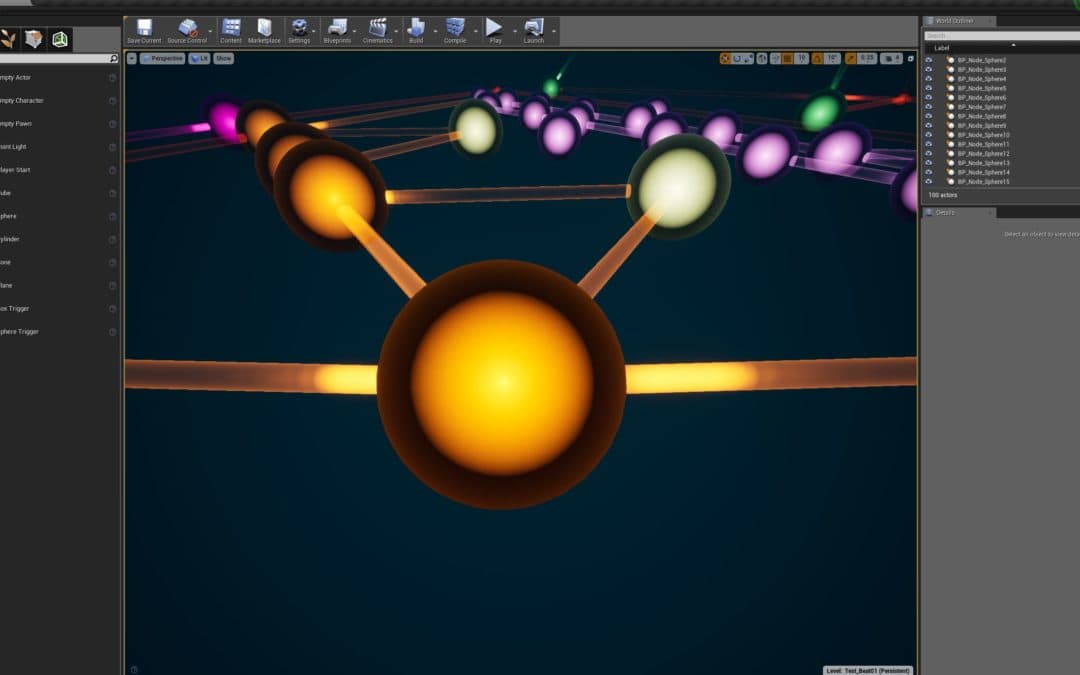 First off, what is Project Mix?

I’ve been exploring with an interactive node-based visual audio simulation in UE4 purely as a way to dive deep into the audio engine’s potential and to try and get something that I think will be really interesting fun to mess with in my free time. The video below shows where it has been sitting for the last month since I messed with it last. Its got a ton of work left with it, but I think it is starting to show some interesting promise.

Sound waves can now be pre-analyzed for envelope and spectral energy to drive Blueprints during playback. This allows sound designers to create compelling audio-driven systems, while offloading the spectral analysis work to improve runtime performance. In addition, analysis data from a proxy sound wave can be substituted for a sound wave’s analysis data, allowing designers to spoof isolated sound events when trying to drive gameplay.

Every .wav file now has settings on it for being able to analyze the data and output it as something that could potentially be used for gameplay / animation techniques. Well.. turns out I might have a use for both of those things. For now I wanted to see how it works and how easy it was to implement.

Here are some settings I am experimenting with inside of the wav file uasset.

Boring Explaination of why I chose these numbers.
Everything is pretty much maxed out and from what I could tell the uasset does not appear to gain size by much when making these values very large. Honestly, they are all undocumented so I have no idea if cranking up these values or adding more and more frequencies to analyze is a horrible thing. I imagine it would be, but right now ¯_(ツ)_/¯

The biggest ones to pay attention to are “Frequencies to Analyze” and “Frame Size”. I am guessing that essentially if I have a 2048 FFTSize and a 4096 frame size then I essentially am allowing 2 frames per section of data? Maybe? WHo knows? WHAT I DO KNOW is that the frequencies to analyze actually do matter and it will do its best later on to try and match or lerp between the correct frequencies if you are trying to say grab something in the 300hz range but there is only data for 100hz and 500hz. (That was actually some nicely commented code under the hood. Thanks Epic!)

Blueprint Time. (Its actually not that bad)

Ok.. this part actually isn’t as hard as it might seem. Really this was super easy overall, just had to find the right nodes.

GetCookedFFTData is the magic node we are looking for and you get it directly from ANY AUDIO COMPONENT. It’s just built right in now which is fantastic. You hook this up to Event tick and you’ll get the Magnitude of the frequency you want whenever that sound is told to play. Since its directly inside of an audio component that also means that you don’t have to sync data up… I am .. really impressed it has this much integration to be honest. I was expecting like some back alley bridge of connectivity between 3 different systems.

With a little bit of a lerp on the magnitude to help smooth out some jitters, the result is not bad at all and I am rolling forward with this as a part of my sound player base class to be able to easily animate things with that data. Essentially now I get animation curves … for free? Hopefully the max settings thing doesn’t bite me later on. To test it I just replaced what used to be 3 animation curves ( One for attack, sustain, and release ) and now have just the straight up data from from the analysis. Which I think is pretty awesome. I am gonna further explore the capabilities of this as I harden a few more of the core systems for this thing. You should be able to notice the animations are much more accurate to the sound you actually hear.

I am gonna keep going. If anyone has any questions / ideas / feedback I am all ears! But that’s all I got for now. I am gonna try to post regularly but … who knows? Just trying it out.